On Friday, June 10 at exactly 9:27 a.m. EST, every adult on Earth drops dead. The children have inherited the Earth.

And their nightmare is just beginning.

Generation 0 is a new work of post-apocalyptic fiction by Alex Vorkov that follows the lives of four survivors into the collapse of civilization: social misfit Josie Revelle; street-smart, hard-punching Shawnika Williams; tomboy Grace Cavanaugh; and charismatic, megalomaniacal teenage psychopath Zane Barzán. While the three girls must fend off gangs, snipers, starvation, and worse, Zane is busy turning his violent cult into a blood-soaked empire modeled after Hitler’s Third Reich

When a maelstrom of events drives these four strangers together, not all of them will survive the night.

Misfit. Brawler. Tomboy. Psychopath. Are they the end of humanity, or a new beginning?

Get your copy here! 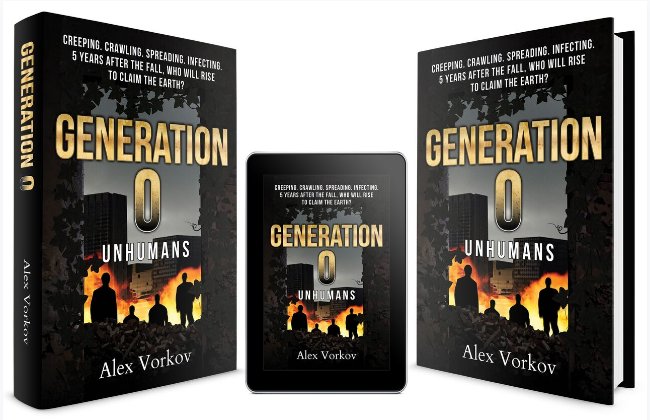 Five years after the fall of civilization, Josie Revelle and her small band of survivors flee a crumbling Washington DC in search of a more sustainable life. Instead they find burnt-out cities and a countryside poisoned by a mutated, vine-like fungus. They’re soon captured by a paramilitary force in thrall to Empress Dawn, a former TV star turned self-appointed royal highness. Her goal is to seize a cache of desperately needed fuel … and to wipe out the Unhumans, shadowy beings thought responsible for spreading a fatal infection as well as for cultivating the blight swallowing the landscape. Josie begins to question the nature of the Unhumans and the true intentions of the empress, but before she can act, a horde of barbarians storms in, bringing chaos and tearing Josie’s band apart. She must now choose a side. One that could force her to wage war against her closest friends. At once a savage survival story and an exploration of honesty and friendship, Generation 0: Unhumans delivers an intricately plotted, dark apocalyptic adventure you won’t want to put down.

Get your copy here!

About the Generation 0 novels:

Generation 0 is a post-apocalyptic fiction series in which all the world’s adults have perished, leaving the rotting husk of civilization to the surviving children. The story centers on a teenage girl named Josie, an undersized social misfit who discovers that her life as a loner has unexpectedly prepared her for survival in a lawless, savage land. But not without learning a few brutal lessons that have left her scarred. Quick with a knife and showing no mercy, Josie soon realizes she has to be as relentless and cruel as her enemies if she hopes to see her next birthday.

Along the way she picks up a few friends who dream of building a better world, which gives her the strength to keep fighting when hope seems lost.

The Generation 0 books are deeply character driven and take place on the street level, where you can see the blood, taste the dirt, feel the cut of the blade, and smell the decay of five billion rotting corpses. As my content warning warning implies above, these are books about kids, not for them. Imagine Lord of the Flies with the tone of The Walking Dead.